skip to main | skip to sidebar

I've just realized I've been abandoning the blog, especially with posting my favorite sketchbook pages, etc. Most of the people in my group probably know this by now, but coming back was pretty tough for me; even now that it's been almost two weeks since our return, the trip is still fresh in my mind, and to be completely honest, I've probably not felt this way since leaving home. The big city atmosphere was more than a nice change, it was like reliving childhood, in a sense, or having to learn to ride a car after the bike: a familiar thrill. It's weird, but the smallest things are the biggest reminders, like still making typos when I write (Qs and As the most), looking at some of the photos, and even the sketchbook... And as for the sketchbook, my expectations were, for the most part, totally different from the outcome: I remember even before planning to go to Paris, I thought the sketchbook I'd bring back would be a kind of masterpiece, each page overbrimming with architecture and famous places and people, and would be something so unforgettably beautiful, I'd pass it on as a family heirloom. Realistically ...while there, I was sometimes thrown off by the assignments, sometimes took too long on one page, but 99% of the time just walked around, sometimes aimlessly and other times hopelessly lost! (I still remember having to run through Chatelet or running around looking for the nearest bus station when the metro shut down; now - some of my fondest memories). By that time I expected an artistic miracle to happen by the end of my sketchbook (which by that time got to be too heavy to carry around, so I wasn't feeling too friendly toward it anyway), but in the end nothing impressive happened. I tried to cheer myself up, and bought a nice little compact book at Sennelier, a good investment that could handle pencil and marker and watercolor and industrial strength acrylics, pretty much all you could think of (but in the end was strong enough for light washes and not much else). I decided to leave it for later, but started it on the plane to Dublin anyway; it's still the one I use right now. And what a difference! I guess the change I was expecting all this time ended up happening only after Paris. Can't say I'm disappointed: after all, it's better than nothing; and I suppose there had to be a "sinking in" period to properly sprout the necessary creativity. All it proves is that Paris won't leave us for much longer than we expected!
Posted by Kira Formina at 2:34 AM No comments:

Looking back at the pics, I thought this is worth mentioning. Kira and I visited Pere Lachaise Cemetery on June 22, and... 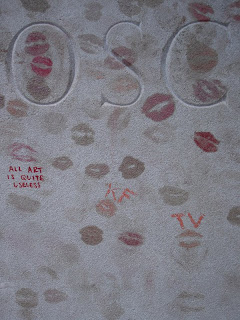 ...we kissed Oscar Wilde's grave!
Posted by Tiffany at 5:46 PM No comments:

Labels: photos, Tiffany Vu
I cannot find the cable to connect my camera to my laptop!!! ARGGHH. I will post the pages soon... I may have to borrow someone's equipment. I recently shared my sketchbook and photos with my Mom and bro and I have found things that I like about my sketchbook that I didn't notice before. I can see a shift... in thinking. Although it happened right at the end so there isn't as much evidence as I'd like there to be. Damn I miss Paris already!!

Kim A
Posted by kimberdink at 1:33 PM No comments:

finally got around to getting images of 5 sketchbook pages i thought are cool. I am sorry they are photographs, and kinda blurry at times, i don't have my scanner yet.. 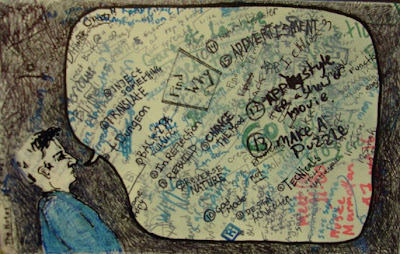 this is the page on which i took notes for the entire class. maybe the notes are not as useful anymore but i think it looks pretty neat.

here is the hot potato spread in my sketchbook. it may have been explained, but if you don't know, its basically a game of tag where people swap sketchbooks and draw in each others. the only thing i actually drew on this spread is the red bull on the right side of the spread. 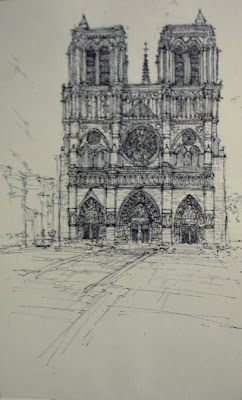 This was a 4 hr drawing early one Sunday morning watching the sun rise. not really that creative but i like it anyway. 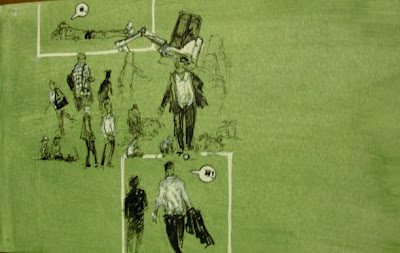 Funny story, a few of us were laying around the gardens outside the Louvre when i saw this guy in a full suit with brief case charging across the grass like a man on a mission. He then finds a spot in the sun and in record time takes off all his clothes and knocks out. he is the one in the square frames. 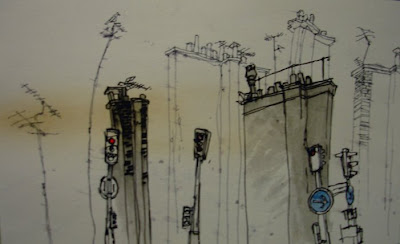 One of the 15 pages, i like this one because its kinda silly. The brownish haze is a burn mark i made by putting my sketch book over a toaster for a bit. The heat toasted the intended page but went through a few more pages though i did not intend it to. kinda neat haze though.


There are still plenty of things i want to try in my Paris sketchbook so i think i will keep adding to it as i have a number of empty pages left. Maybe ill post some more.
Posted by Corwin Herse Woo at 12:05 AM No comments:

Is this the end?

I am back home and trying to adapt to my regular life again. I had such a wonderful time on this trip, not only seeing Paris, but also getting to know such wonderful people. I have so many memories from our adventures that I will treasure forever and I loved getting to know you all better.

Here's some of my favorite sketchbook pages from the trip.
See you all again soon. 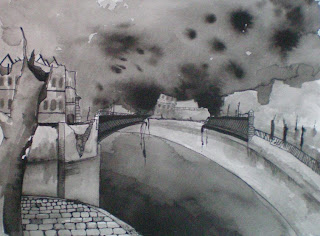 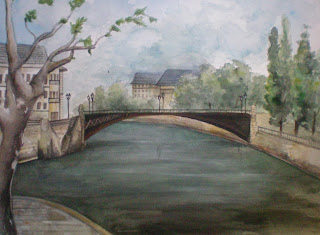 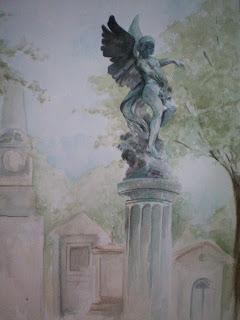 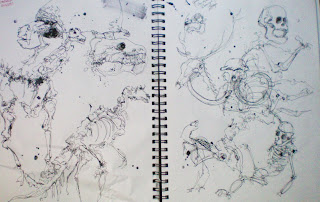 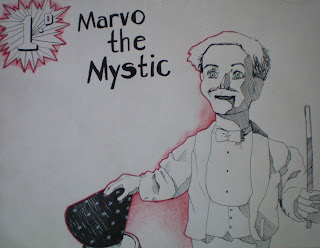 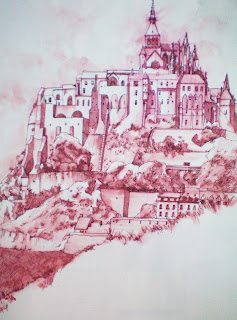 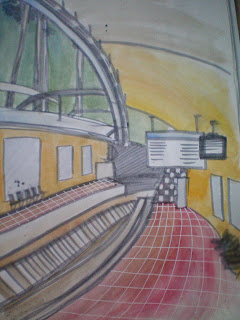 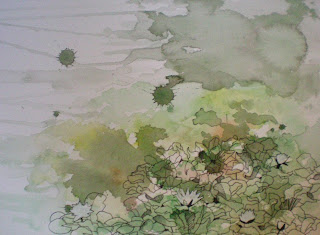 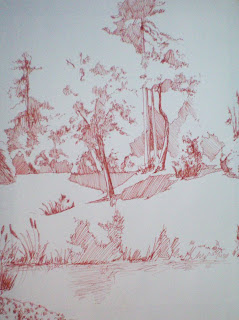 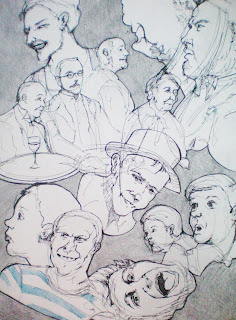 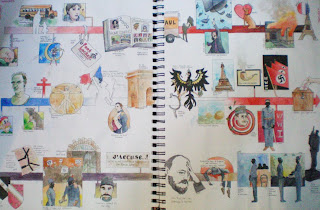 So now that I am back in the comfort of my own home and have a computer that doesn't freak out on my (I'm looking at you computer lab) here are some of my favorite pages from my sketch book. 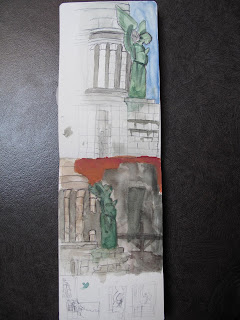 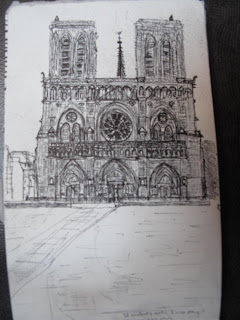 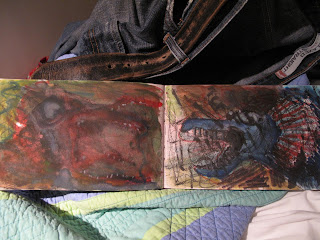 Lost Chronicles: Gus, I, and Versailles 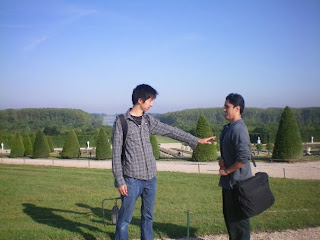 This is a first hand account of an adventure Gus and I had visiting Versailles. We got there early in the morning to avoid huge crowds of tourist. I was impressed when I first saw the gardens. The fact that it was empty of tourist and lit with cool morning sun made the view a grand spectacle. But man, these gardens were HUGE!!!! HUGE!!!! It's possible to see from the photo, but starring out to the Versailles gardens, the horizon line is not even the end of the gardens. Although we came in a group of four, Kira and Leann were separated from Gus and I when an old man jogger gave us two a little tour of the gardens. It was about 9:30am and Gus and I could not find Kira or Leann. We decided to meet them at Marie Antoinette's house since we were all planning to go there. We didn't grab a map because we figured it was easy to find. And it should have been, but little did we know that Gus and I would spend the next few hours lost walking the gardens. We passed the main gardens of Versailles which contained many impressive statues and fountains and ended up walking to the outskirts of the garden. The outskirts of the garden is like a giant man-made forest. There were no maps, and no people except for the occassional joggers. Gus and I figured we weren't lost because it was still early in the morning and the tourist hadn't showed up yet. We found a snail and made marks in the grounds as indicaters of our guesses to where it would be in a few hours. As we continued to walk further into the gardens, our search for Marie's house became less confident. The paths in the forest were long, and we couldn't really see past the trees so we were searching for the house aimlessly with no idea to where the house could be. We walked and walked. After a couple hours we stumbled into a supermarket. I thought it was odd to put a supermarket in the middle of the Versailles gardens but we used it to gather refreshments and we asked a lady if she knew where the house was located. She looked at us confusingly and then told us that we were not in the gardens anymore. It so happened that Gus and I walked so far we had accidentally exited the gardens!!! She told us to go back and turn left as soon as we reentered the gardens but she lied!!! We went left but we couldn't find it!!! So again we walked aimlesslyin search for the house. We were tired and we were lost and we were slowly going insane because we had no food! I was about to crack when we stumbled into the marking we made hours ago (mr. snail was nowhere to be seen). The markings saved us, and we finally started recognizing our surroundings. We didn't care about the house, we just wanted to get back to main gardens, to where people were. But eventually found the house and finally got something to eat. The gardens were now packed with tourist and the sunlight was hot. I checked the time and it was about 1:30pm meaning we were lost for nearly 4 hours! I think Gus and I got to see a part of Versailles that not many get to see. It wasn't the coolest thing ever, but it sure was an adventure!
Posted by Chris Lam at 5:59 PM No comments: 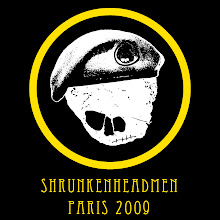